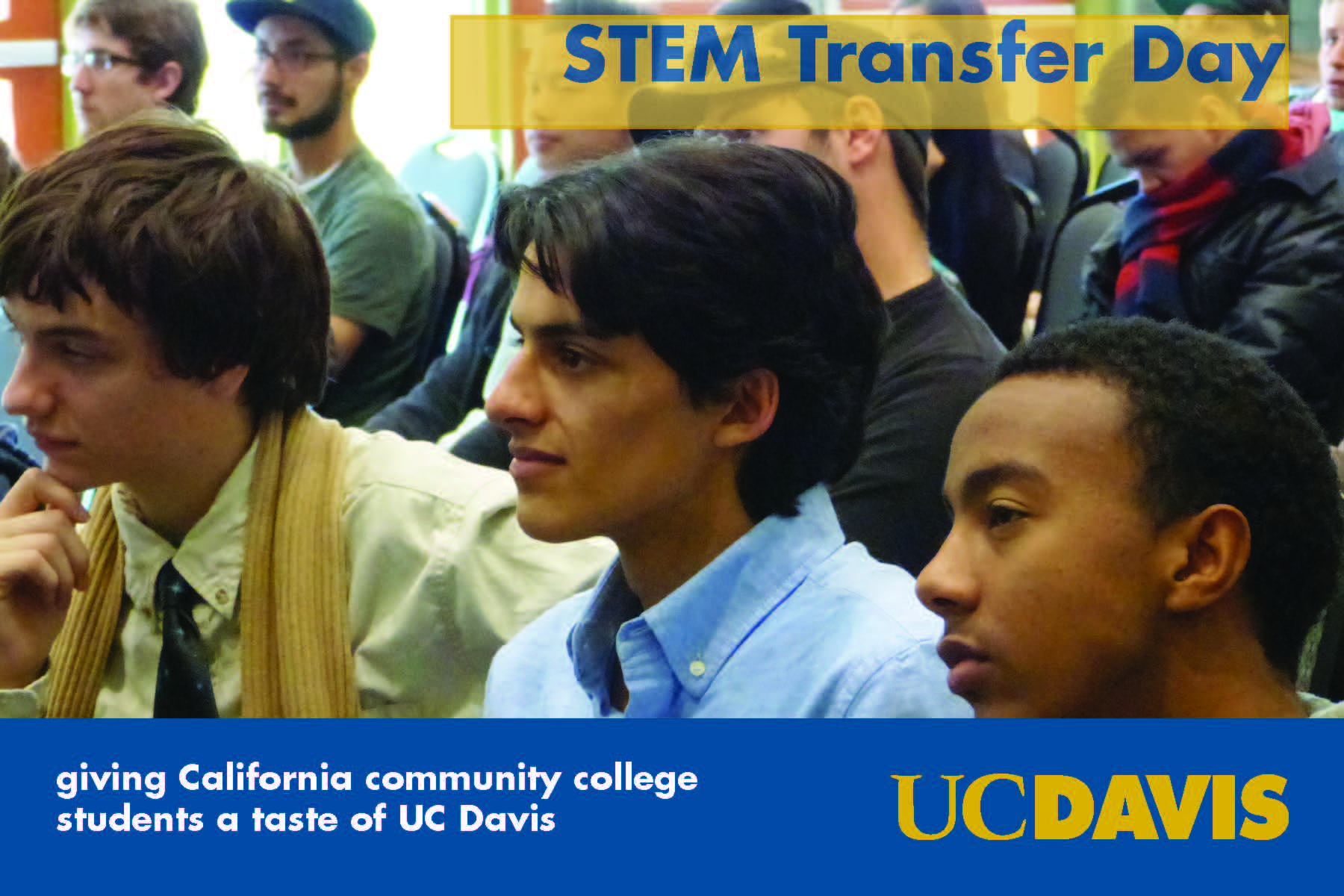 Approximately 25-35 percent of new students enrolling at UC Davis each year transfer from community colleges.  Arriving mostly as juniors, transfers face special challenges in making the most of their years here.  In addition to adjusting to the quarter system and having to learn their way around a large campus, it takes time to find all of UC Davis’s resources and establish relationships with faculty and fellow students.

At the same time, students have much to gain from a move to UC Davis. Jasmin Ramos, a physics major at College of the Sequoias, became interested in physics through her high school AP teacher and is drawn to a career in research and teaching. With only three physics majors at Sequoia, she needs a larger community.  She has branched out into engineering, and serves as president of COS’s Society of Hispanic Professional Engineers chapter.  Ramos came to STEM Transfer Day eager to explore the possibilities UC Davis offers in both physics and engineering.

Ramos attended a panel on careers in Engineering & Mathematics and Physical Sciences (MPS) which featured professors from three engineering departments along with mathematics professor Jesus de Loera representing MPS.  (A Life Sciences panel was offered concurrently.) Takamura linked engineering with “ingenuity,” describing the creativity involved in biomedical and biochemical engineering.  James Schaaf of Mechanical and Aerospace Engineering highlighted UC Davis’s growing relationship with NASA through work on the Mars rover Curiosity. Mark Rashid described civil engineering as responsible for all the things needed for “carrying on a happy productive life,” showed photos of major engineering feats such as the Hoover Dam and … bridge in Japan, and explained that civil engineers are needed wherever people settle.

De Loera, who has earned campus recognition for mentoring undergraduate research, delighted the students with his talk, Beyond Calculus.  “Math is the new sexy,” he said, explaining the desirability of math in a variety of professions.  “The more math you learn, the more powerful you become.”

What advice would they give on succeeding at UC Davis? “Take a lighter load first quarter,” said Schaaf.  “Knock on doors,” encouraged Rashid.  De Loera echoed that invitation:  “Come to office hours.  We want to meet you.”

In her work at the UC Davis iAMSTEM Hub and Center for Biophotonics, educator Ana Corbacho leads workshops to help students learn how to work in labs, develop teamwork skills, and transition to life on campus.  Corbacho led a group of about 90 students through an interactive exercise designed to demonstrate the importance of having a variety of personalities on a team.  She asked them to identify themselves as “leaders” or “followers.”  Only six or seven students identified as “followers,” and said that their shyness was a liability.  Corbacho divided students into teams, assigning half the teams to do a group challenge, while a second team observed, recording notes.  Unbeknownst to the project teams, the notetakers were tasked with identifying which team member they would like to hire to work for their “organization.”  Surprisingly, it was not always the obvious leader, but often a quiet member who observed, worked persistently and facilitated.  While the challenges provided great team building and a lot of laughter, the message that it’s not always the dominant team member who is most desirable was in important takeaway for all.

Students: "You don't have to go through this alone."

Before the group broke up for lab tours at the end of the event, participants questioned a panel of UC Davis STEM transfer students including seniors Fatima Sulaiman and John Tran, and junior Robert Monroy.  Students asked questions about how to succeed, both in community college and at UC Davis.

What was the hardest thing about coming to UC Davis?  Getting used to the quarter system was the consistent answer.  “Do things right away. Don’t wait to do anything,” said Tran.  “Make a detailed schedule including lunch and travel time,” offered Monroy.

How did you guys survive and conquer in community college, where people aren’t enthused about school? Sulaiman described being depressed her first semester after not getting into the school she wanted.  “I found great classmates to study with.  Just get involved.  The best thing I ever did was walk into the MESA center.”  “Exactly what Fatima said,” echoed Tran.  “Find a group – for me it was SACNAS. I was around people who were interested in science and wanted to transfer.” Monroy spent five years at community college.  “I was not the best student in high school,” he said, but things took off when, after an introductory chemistry class, he switched from political science to bio.  “What helped was talking to professors.  That’s what got me into a lab.”  Eventually, he started a SACNAS chapter with his brothers.

Are there things you wished you had done differently or learned sooner?  “I got motivated,” said Tran.  “Got into study groups.  You really don’t have to go through this alone.”