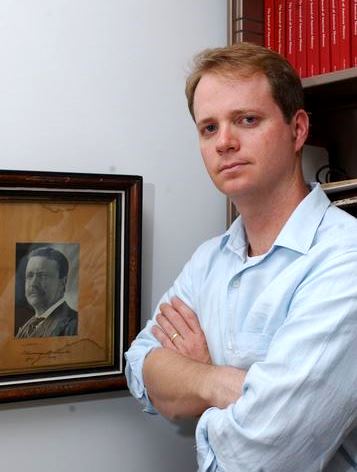 Eric Rauchway, Professor of American history at UC Davis, has been selected as the acting director of the University Honors Program and Associate Vice Provost for Honors.  He takes on this position following the departure of fellow historian Ari Kelman, who is leaving UC Davis for the Pennsylvania State University.

The program will see significant changes affecting its structure, curriculum, and the process of student selection.   The Integrated Studies Honors Program and the Davis Honors Challenge are being merged into the single University Honors Program and the distinct tracks phased out.  Campuswide faculty participation will be increased through a revised curriculum and expanded mentorship.  The new curriculum offers honors sections of foundational GE and major courses in the first two years; options for research, service, and special studies in the third year; and a range of discipline-appropriate capstone options in the fourth year.   A program matching incoming freshmen with faculty mentors piloted last year will be offered to all incoming UHP students.

“Uniquely among the UC campuses, Davis offers the opportunity for undergraduates to enjoy the benefits of a collegiate education within a world-class research university,” Rauchway said.  “The University Honors Program is a superior showcase for those qualities. I look forward to working with the terrific students, professors, and staff in the UHP to demonstrate the best UC Davis can provide in undergraduate instruction and research.”

Rauchway has been on the UC Davis faculty since 2001, and was University Lecturer of Modern History at Universty of Oxford from 1998-2001.    On campus, he served as the director of the Center for History, Society, and Culture in the Division of Social Sciences, and was one of the founders of the Public Intellectuals Forum that later provided the basis for the Chancellor’s Colloquium series. He earned his Ph.D. from Stanford University and AB from Cornell University, and is a member of Phi Beta Kappa.

A highly acclaimed historian, he has published a number of leading books on twentieth century culture and politics including Blessed Among Nations:  How the World Made America (2006), Murdering McKinley:  The Making of Theodore Roosevelt’s America (2003), and The Refuge of Affections:  Family  and American  Reform Politics,  1900-1920 (2001), as well as The Great Depression and the New Deal: A Very Short Introduction in the Oxford University Press series.  He has written numerous essays and articles, and is a frequent contributor to the Times Literary Supplement and Reviews in American History.

“Eric is a strong mentor of undergraduates and an effective undergraduate teacher.   I have always been impressed by his keen intelligence and his commitment to ensuring that our campus programs and processes work well and achieve our highest aims.  I’m sure that Eric’s leadership will put us in the strongest position possible as we take the University Honors Program into a new phase of excellence, better serving its accomplished and dedicated students,” said Vice Provost de la Peña.

Professor Rauchway’s service as Associate Vice Provost and acting director of the University Honors Program will begin on July 1, 2014.  The appointment is for one year, after which Undergraduate Education will search for a permanent director.

For information about the University Honors Program, visit http://honors.ucdavis.edu