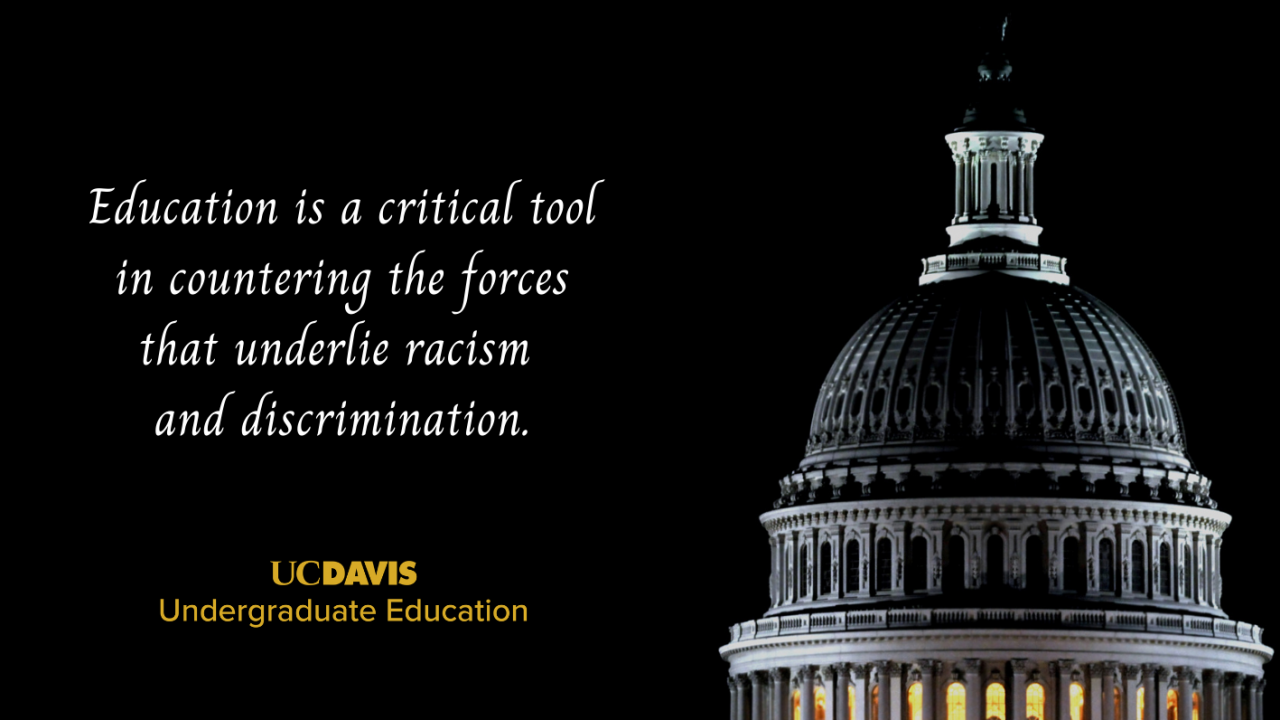 UE Statement In Response to Riots at the U.S. Capitol

The January 6, 2021 joint session of Congress, wherein our nation’s senators and representatives met to count the state-certified electoral ballots from the 2020 U.S. presidential election, was violently disrupted following riots and demonstrations on the National Mall. As has been widely broadcast by news organizations, a security breach by rioters resulted in violent clashes and halted the joint session. These disturbing acts represent an attack on our nation’s democracy, causing physical harm to numerous people and costing the lives of five individuals. Furthermore, the Confederate flags and other offensive symbols on display make clear the racist motivations behind the riots, and underscore the systemic oppression and racism deeply embedded in our country.

Undergraduate Education stands with Chancellor Gary May in his statement on the events of January 6.

Although we recognize the importance of the constitutionally protected rights to assemble and protest, the community of Undergraduate Education abhors and rejects acts that perpetuate systemic oppression and racism. We do not support violence in any form, and we are troubled by the starkly different treatment and displays of force from police toward the violent rioters against the election certification process, versus the peaceful demonstrations for racial equity by the Black Lives Matter movement in summer 2020, both on the grounds and steps of the U.S. Capitol. We recognize that such differential treatment can further the trauma of yesterday’s acts, especially for members of our community who have lived experiences of racial violence. We encourage everyone to seek emotional and psychological support for individuals and communities, either through personal networks or the links and strategies provided by our Office of Diversity, Equity, and Inclusion.

In addition to their clearly racist nature, the January 6 riots were also an attempted insurrection built on lies, misinformation, and willful ignorance about the validity of the democratic process. As an institution of higher education, we condemn the idea that a political agenda can determine facts, and that objectivity and science do not matter. In the face of such actions, we reaffirm our mission of inclusive education and our commitment to anti-racism and social justice, now more than ever. Education is a critical tool in countering the forces that underlie racism and discrimination. We recommit to advancing equity and inclusion in our work for the academic mission of UC Davis. We recommit to advancing an education that recognizes and dismantles discrimination in all its forms.

Lowering the Barriers to Undergraduate Research

An Ethnography of Racial Trauma