A New Vision for Advising

An Interview with Kayton Carter

Kayton Carter, MA has been named Executive Director for Academic Advising Enrichment at UC Davis. Academic Advising Enrichment was established in 2014 to provide centralized, campus-wide leadership and advocacy for academic advising.  Carter, a doctoral candidate in the UC Davis School of Education, is the second Executive Director to hold this position. We interviewed him about his vision.

You’ve had leadership roles in the advising world at UC Davis for a long time. From your vantage point, what are some of the most important things to implement as Executive Director of Academic Advising Enrichment?

An advising philosophy the entire campus can align with. This is something I’ve seen work well on other campuses, and something we need here.

At UC Davis we have advisors in a variety of roles, offices, and relationships with students. We have advisors who advise from the perspective of experience, and advisors who have been trained in a theoretical background. So we have fragmented philosophies and ideologies informing our practice.

We can seek alignment across campus despite our diverse positionalities so that the advisors in Athletics speak the same language as the advisors in BioSci and the advisors in Student Affairs. And all of that, by the way, is aligned with an overall University objective for advising.

There needs to be alignment between those different philosophies and objectives and experiences--a common ground on which we can all stand and then build our own individual ideologies. And that foundation needs to have a strong research element. 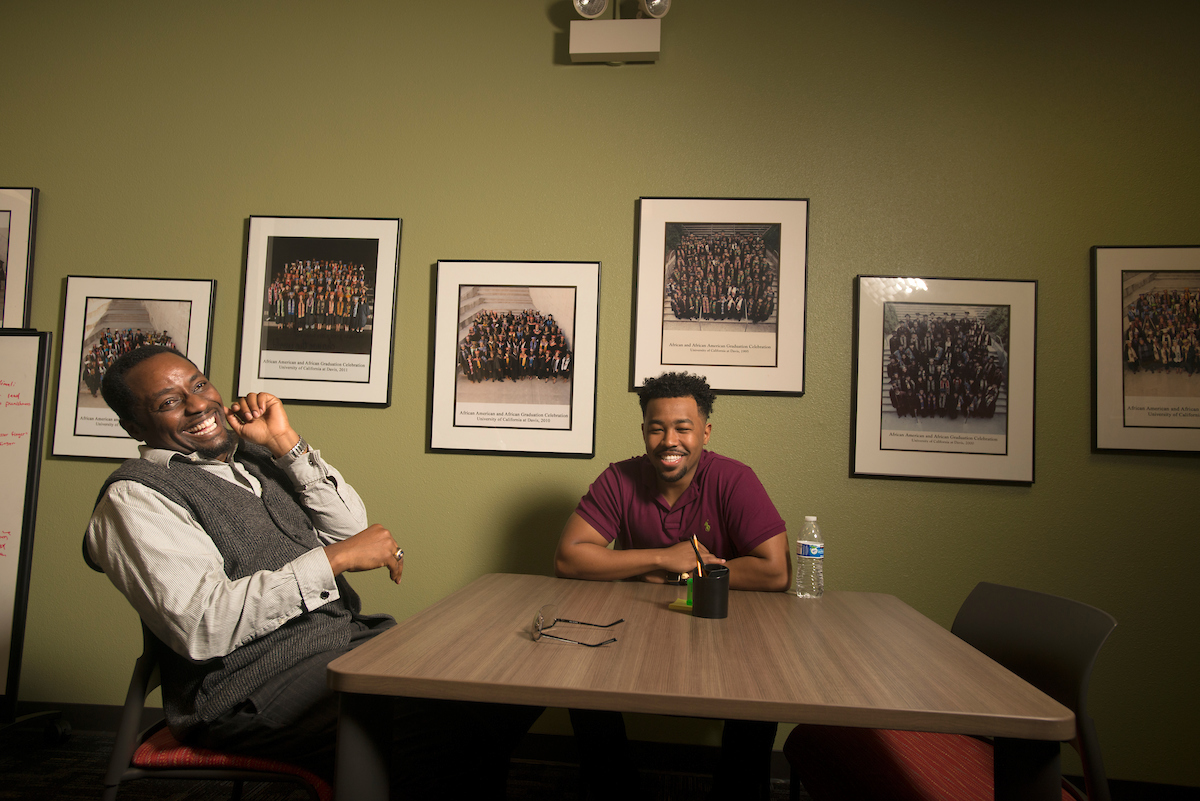 Carter's approach to advising is informed by a range of perspectives, as well as his scholarship. Read his story, Being that Light: Building a career helping others succeed on the FirstGen website.

You’re talking about creating a philosophy of advising for the whole campus during a time when we are keenly aware of the impacts on our students of the pandemic and from the traumatic events that have erupted over the last year. In a recent talk, you mentioned trauma-informed advising. This seems particularly important in the times we’re going through now. Is this a new idea?

Trauma-informed advising has to do with recognizing the importance of mental health and acknowledging that the various kinds of traumas students have experienced impact the way they will learn and engage as students. It has existed on college campuses for a long time, but in our country we haven’t always been comfortable having conversations about mental health or the various kinds of traumas we carry.

Mental health has become something that I don't think we're ashamed of to discuss anymore, and consequently we're putting systems of support and place to account for that.

These kinds of changes happen in response to historical events on college campuses, often led by students. When I consider the history of higher education, some of our mental health services were a result of seeing a high influx of former soldiers who came to college after the war, and as a result of the GI Bill. Colleges saw then, as we do now, that we needed to create support systems that can account for the diversity of a student population over time.

It’s become more palatable to recognize mental health and trauma, because the conversations about trauma have become more palatable. One might attribute these recent changes to the #metoo movement bringing one kind of trauma to the forefront of people's thoughts (i.e. sexual assault, campus rape and spousal abuse). At the same time, we're starting to see a rise on campuses in students who have experienced various kinds of trauma entering our campuses, and therein lies the necessity for increased resources to address their needs.

Over time many universities have become more receptive to the disparities of experiences of the student population and therefore are open to creating comprehensive systems of support to account for these disparities.

You have done significant work to advance support for underrepresented students at UC Davis. Can you share some of that history?

The misconception is that we are the west coast – and considered as the Left Coast - and we don't need all of that – when the reality is that we need it just as much if not more than any other campus outside of the state.

That was the basis upon which I established these retention centers/initiatives, because I was thinking to myself, where are the administrators who are solely responsible for the underrepresented student experience?

Likewise, UC Davis didn't always have an LGBTQIA Center on our campus, or the WRRC. In fact, the Cross Cultural Center came to be after students staged a hunger strike in 1990 calling attention to their needs.

You’re on the advisory board of Beyond the Barriers. What can you tell us about that?

The Beyond the Barriers initiative is another example of how UC Davis has evolved to meet the needs of a very diverse population of students. And this initiative is not specific to an ethnic population, but rather a common experience for many students who have been impacted by the prison industrial complex, or have been incarcerated. These students are seeking a higher education, and are willing to change their life's course by receiving a college degree, thereby creating more opportunities for themselves in the future.

The misconception by some is that folks who have been incarcerated, or people who are relatives of prisoners don't have an interest in college. And obviously that's not the case.

We have places like UC Irvine who are now administering degrees to people who are currently behind bars. So college access is more than a notion. It should be available to anyone who has an interest in, and has the fortitude and commitment to endure what a college education entails. What UC Davis has done is recognized this student population, and we are showing them that we are committed to them just as we have for the other demographics of within our student population.

What is one of the most important things an academic advisor can do to support students during these times?

Try not to project your personal values onto the students you are advising. Sometimes [we] have tunnel vision in terms of our responsibility to students. Listening is the first step, being aware of campus policies and resources, and then responding accordingly is most important thing.